You are here: Home

Farnsfield Bowling Club was formed in 1960, following the earlier donation of a plot of land to the Parish Council for recreational purposes by local industrialist Sir Stuart Goodwin.

Grants were made to develop the site and establish a children’s playground, tennis courts and a bowling green. By 1960 facilities were completed and the first match was played against Southwell Town Bowls Club. 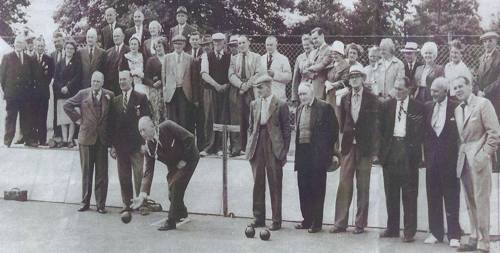 The game rapidly became popular and 42 members were present at the 1st Annual General Meeting on 31 March 1961. In the beginning, the club shared a small wooden pavilion with the adjacent tennis club, but this in time became too small to meet the needs of both clubs. In 1981 Fred Westerman, a club stalwart, was instrumental in locating a redundant site office which he gifted to the club. With Parish Council approval and financial support it was transported to the club ground where members took on the task of cleaning, decorating, and installing toilet and kitchen facilities to make it into a fine clubhouse.

Since that time, the clubhouse has been extended twice to meet the needs of a growing club., firstly in 1987 and more recently in 2010 to coincide with the club’s Golden Anniversary. Finance was provided from club funds supported by generous grants from the Sir John Eastwood Trust and the ‘John and Nellie Brown’ Trust, together with further help from the Parish and District Councils.

In 1985 the Parish Council agreed to release additional land to allow the extension of the bowling green to meet National Standards. With the help of many volunteers from the club, a grant from the District Council, and help from the young people of the Newark Community Programme, the project was completed by June 1987.

Today, Farnsfield has a full sized green with eight rinks in each direction that is highly regarded by the bowling community. Since it’s inception the green has been maintained by members of the club. Volunteers have provided their services for an average of 40 hours a week during the summer, and work continues out of season. This has entailed considerable investment in equipment and fertilizers and dressings etc.. As a result the green has been superbly maintained and for some years has been the chosen venue for many county events and competitions. Similarly, the surroundings have been continually improved by members thus providing the village with a valuable asset.

We are justifiably proud of our green, our clubhouse, and our contribution to the world of bowls.